At Ambassadors, we have seen and believe in the deep impact of football on a community. In 2016 we began a vision in partnership with the International Christian Center (ICC) to develop a safe place where people could come together, play football, develop their faith, and prepare for a positive future following Jesus.

In September 2018, our vision became a reality as we opened the first-ever turf fields to be on the roof of a building in Kenya! The two fields soon became a community for people in Imara Daima, Embakasi, and Nairobi. 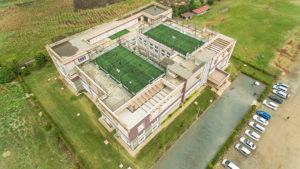 Since we opened, we have used the fields to minister to over 17,000 people from all walks of life and have heard great stories of transformation.

We have seen the fields impacting a lot of people, but sadly, after a year of operation, the building hosting the fields started leaking rainwater from the rooftop to the rooms below due to an unusually heavy rainy season. This was a great inconvenience and hindrance to the building’s operations and as a result, the fields had to be closed down temporarily so repairs could be made. The fields are still closed as we write this.

We long to see the impact restored and developed even further.  And you can help!  Our plan is to put a covering over the fields to ensure a fully functioning rooftop facility and to develop more fields in the compound.  We see these as tools to help continue bringing hope to the community through football. Would you join us in bringing this hope to the city, country, and region?

We have a crowdfunding page set up with a goal to raise $50,000 to repair the building, restore the fields, and expand to new fields!  Every dollar counts and will go towards the development of the facilities to continue being beacons of hope to the community.

Every holiday, we use the fields to host a girl’s only camp and target girls coming from the nearby Mukuru slum. Our aim is to listen and speak hope to these girls who often experience insecurity and poverty which leads to teenage pregnancies and early marriages.

We met Judy* (Not her real name) at one of our camps when she was 15 years old. Judy was a bright student with a radiant smile who faced many challenges in her day to day life. During camp, she shared some of her story with one of our coaches, Josephine. She told Josephine that her mom had recently lost her job, leaving her unable to afford school fees or put enough food on the table. Because of this hardship, Judy felt pressured to get money in exchange for sex. Josephine listened with empathy, encouraging her to not go down that path and offered her hope in other ways. Judy left camp feeling more hopeful of her situation and thankful for a friend and mentor in Josephine. 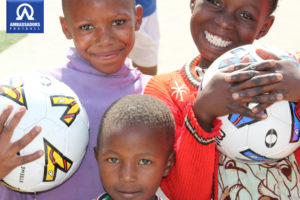 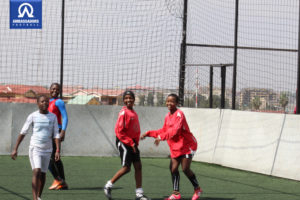 When a young Andrew joined our football club, he was very shy and timid and only spoke with the players he knew from his neighborhood. In his time with us, we formed a relationship with him, shared the gospel, and consistently challenged him to be of good character.
As a result of healthy role modeling by the coaches, he slowly grew out of his shell and we began to see a transformation.

Since joining us, Andrew has grown in his character, knowledge of God, and football skill. He is disciplined and confidently expresses himself both to his peers & coaches. These traits have earned him the captaincy of the team and he has been a great Under 13 team leader.
Every Saturday morning, the fields host approximately 100 children who like Andrew, can grow and impact other people. 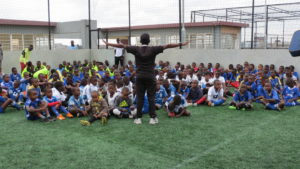 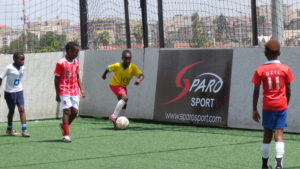 The fields would be open until 10 pm which was an amazing opportunity for us to reach out to the ‘working-class’ community of Imara Daima. Every evening, men and ladies would leave their workplaces and come straight to the fields to play and laugh with their friends before going home. We used this platform to share the gospel and portray Christlike character. After every session, we would circle up, have a short and uplifting chat, and close in prayer.

A great encouragement to us was seeing some men limit their visits to the bar opting to spend time with us in the fields instead. 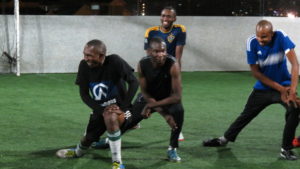